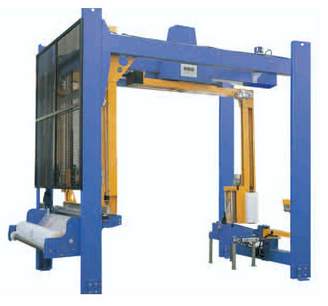 Models AV620 and AV630 Top from the "PERIPLO" line fulfil the requirements of companies with high production rates. The automatic wrapping system with rotating arm that moves around the immobilised pallet can also be used to wrap very unstable or extremely light loads. The variable speed of the rotating arm and the up and down movement of the reel-holding unit adapts the layering of the film coils to the wrapping requirements. The standard reel-holding carriage incorporates motor-driven film pre-stretching.

Makes the most of the film

The motorised film pre-stretch device assembled on the reel-holder unit stretches the film before applying it to the load, making the most of the elastic properties of the stretchy film. This system reduces pressure on the edges of light or deformable loads and significantly reduces film consumption. Using a sensor system, the device detects the amount of film required, making it possible to automatically change the extension of the film, adapting it to the rectangular shape of the pallet.

At the beginning and end of the wrapping cycle the film is held in place by a gripper. When the cycle is finished, it is mechanically cut by a blade. At the same time a sealing device with hot buffers seals the end flap on the pallet. Lastly, the film seal is ensured by a bonding brush which runs mechanically over the entire height of the film strip.

If the pack has a particularly uneven shape, a special rigid retractable striker is used to facilitate sealing; alternatively, the flap can be sealed down using jets of hot air.

AV630 Top wrapping machine with sheet feeder unit allows you to obtain integral wrapping, in automatic operation, on the five sides of the loading unit, ensuring excellent protection from water.

The sheet feeder automatically finds the height of the pallets and is accordingly able to work with loading units which continuously change in height.